The result of the Final Testing and Sealing (FTS) of Vote Counting Machines (VCMs) held at the Philippine Embassy last Tuesday was very reassuring. The VCMs will be used for this coming election period from April 13 to May 13 for Senatorial and Party List Representatives. For registered Overseas Filipinos in countries under the Embassy’s jurisdiction, namely New Zealand, Cook Islands, Fiji, Samoa and Tonga, a system of Automated Postal Voting will be implemented. 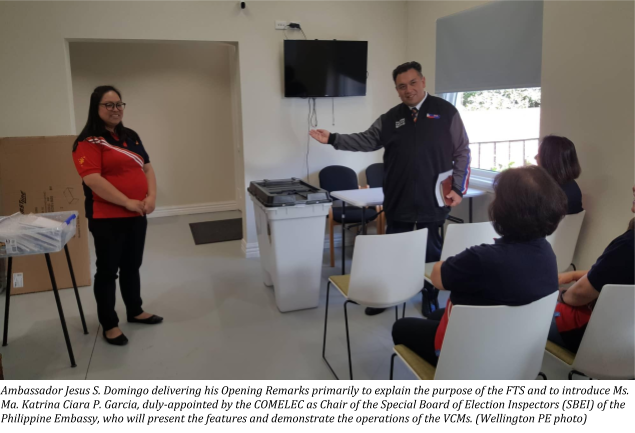 In front of witnesses, the Embassy, led by Ambassador Jesus Domingo, unpacked and set-up the VCMs and their accessories as well as demonstrated the operations to be followed, from initialization to sealing, during the upcoming month-long voting period.

In particular, 10 volunteers were able to see up close the VCMs generating reports of “0” votes for all bets, indicating that the machine was activated for the first time and no ballots have been scanned. They also tried filling up their sample ballots, inserting them to the VCMs, and closely observing the equipment count their pretend votes.

The test was conducted on both the main and contingency VCMs, as well as for all the 24 COMELEC-assigned precincts under the Embassy’s jurisdiction with exclusive main and back-up Compact Flash (CF) SD cards and three unique (Personal Identification Numbers) PINs/digital signatures each.

The 10 volunteers accomplished fresh ballots per test, where they were free to experiment with possible errors that could be encountered during the actual polling. Some creased, smudged and put stray marks on their ballots. All these were nonetheless accepted by the VCMs.

In one test run though, only nine out of ten were read for senatoriables, since a volunteer chose 13 candidates. This is one vote more than the 12 required. As such, a report of “overvote” was printed by the machine. All other entries for senators were not recorded although the selected party list was captured. The Embassy explained that the VCM is programmed to register all entries for senators as long as they number 12 and below.

The volunteers were able to confirm, as shown in vote receipts produced by the VCMs, that their mock votes were accurately counted. The machine output matched their filled up sample ballots.

For the entire FTS, manual counting was also done to validate VCM results. The whole process was a success. There were no glitches encountered and no other untoward incidents occurred.

At the conclusion of every trial, the VCMs were “re-zeroed”, i.e., reset to its initial state, voiding any entry inputted. After the final run, the VCMs were finally sealed, stored and secured, ready for activation again during the Overseas Voting period. 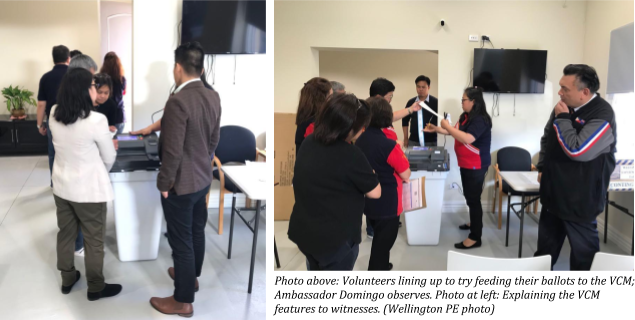 However, the Embassy would like to underscore that each overseas voter is assigned only one special ballot. For this reason, the Embassy would not be able to reissue replacements for those torn or spoiled. Voters are therefore, reminded to carefully read the guidelines included in the voting packet that they will receive and complete their ballots properly. More specific guidelines will be issued in the coming days to help Filipinos overseas exercise their right to vote. 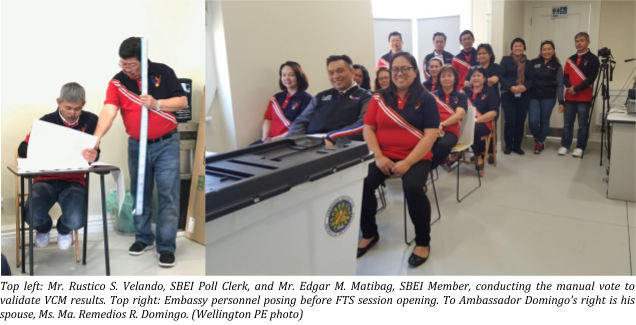