As a fitting tribute to Philippines’ National Hero, Dr. Jose Rizal, on his 152nd Birth Anniversary and in celebration of the 115th Anniversary of the Proclamation of Philippine Independence, the Philippine Embassy in New Zealand launched on 22 June 2013 the Sentro Rizal. It was a cold, rainy and windy Saturday afternoon but the weather did not stop the guests from attending the launch of the library and cultural centre, named after Rizal and located at the Philippine Embassy chancery, for the promotion of Philippine arts, culture and language. 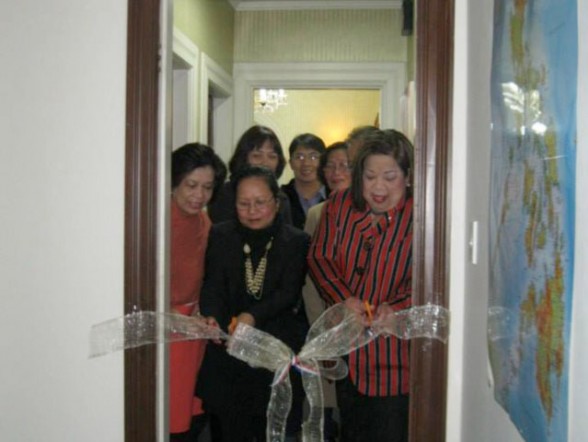 Philippine Ambassador to New Zealand Virginia H. Benavidez officiated the Ribbon Cutting Ceremony. In her message, the Ambassador reiterated the need for Filipinos overseas, especially the youth, to know more about their roots, history and values and engrave in their hearts the heroism, sacrifices and legacy of Jose Rizal and the founding fathers of the Filipino nation. She highlighted the importance of promoting the country's historical and cultural heritage and resources, as mandated by Republic Act 10066 or the Heritage Law that created the Sentro Rizal. Aside from being a repository of materials on Philippine art, culture and language, the Sentro Rizal shall also organize cultural events and activities for Filipinos, especially for children overseas, coordinate activities of visiting artists and performing groups from the Philippines, and offer Filipino language courses, as well as exhibits, mini-concerts, poetry-reading, and Philippine cuisine lessons. “The setting up of Sentro Rizal is our humble tribute to the memory of our national hero whose life and works stoked the fires of nationalism and sparked the spirit of liberation. Together with our other heroes, Dr. Jose Rizal is one of our strong and enduring pillars that make the Philippines stand proudly in the community of nations and a respected voice for freedom, democracy and the rule of law in the councils of the world,” Ambassador Benavidez stated. The holding of the first ever Filipino Language and Cultural Enrichment Programme: Mag-aral Tayo ng Filipino” at the Philippine Embassy last April and May is in line with the Sentro’s objectives of promoting the history, language, beauty and greatness of the Philippines and inculcating the time honoured values, deep rooted traditions and richness and variety of culture of the Filipino people especially among the children and youth of the Filipino community in Wellington.

The Unveiling of the Bust of Dr. Jose Rizal followed after the speech of Ambassador Benavidez. Together with the leaders of the Filipino communities in the Wellington region, Ambassador Benavidez unveiled the Rizal bust that came straight from Manila.

In honor of the man after whom the Sentro is named, a poetry-reading of Rizal's earliest work was performed by eleven-year-old Paolo Rafael M. Obach, a participant of the Embassy's first run of the Filipino Language and Culture Enhancement Program (FILCEP) more than a month ago. The poem that he recited, "Sa Aking Mga Kabata," was written by Jose Rizal when he was eight years old.

In connection with the launching of Sentro Rizal, the Embassy ran an Essay Writing Contest for over a month, with the following themes: (1) Who is Dr. Jose P. Rizal to Me?, (2) To the Filipino Youth, and (3) Dr. Jose P. Rizal’s Importance and Impact in Today’s World. Ms. Anita Mansell, Mr. Mar Esparas and Ms. Arla Fontamillas were the judges of the contest.

That afternoon, the contest winners were awarded. A Certificate of Recognition, a Rizal trophy, and a gift were presented to First Place Winner, Mr. Pete Zaesar T. Galula, a 26-year-old Filipino who came all the way from Auckland. In his acceptance speech, Mr. Galula said that in writing his piece, he wanted to inspire the younger generation to be world-class like Rizal, to be proud being a Filipino even and especially in a foreign land. Mr. Carlo Edward B. Sagge from New Plymouth and Karen Sionzon were the Second and Third Place Winners respectively. Certificates of Participation were also given to Ms. Lelia Ferrer and Mr. Noel Bautista, who were both present at the event.

Wellington-based Filipino blogger Mr. Noel Bautista shared his thoughts on Rizal vis-à-vis his life as a migrant. He said that he can personally identify with the national hero because of his love for country and adventurous spirit, even when abroad. Saying that as Rizal would have found comfort in a library of books and periodicals about the Philippines in a foreign land, Filipinos in Wellington, New Zealand should be thankful that this is now available to them through the Sentro Rizal at the Philippine Embassy Chancery.

The guests enjoyed photo-taking, browsing at the Rizal books on display, watching video clips on Rizal, patriotic conversations and fellowship, while being served with Filipino culinary delights of homemade taho, pan de sal, chicken adobo, pansit and lumpia, prepared by the private staff of Ambassador Benavidez at “Ang Bahay” (Official Residence). The historic event was another showcase of the richness of Filipino history and culture, well appreciated during that cold winter afternoon in Wellington and striking a nationalistic spirit and nostalgic feeling for the Motherland among the members of the Filipino community.