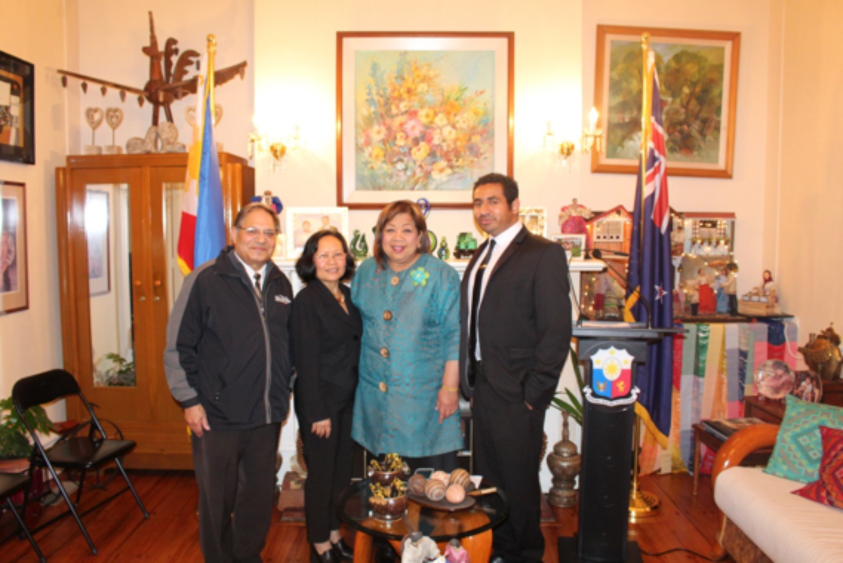 Minister and Consul General Arlene Macaisa started the programme and called on Bianca Benavidez, the Ambassador’s daughter who led the opening prayer. Mr. Mohamed Mahmud, Past President, MCCW thanked Ambassador Benavidez and the Philippine Embassy for the warm reception and gracious hospitality extended to all of them and spoke on the significance and impact of the work and advocacies of the multicultural councils around New Zealand. Chancellor Ian McKinnon reiterated appreciation for the generous hosting of the NZFMC at “Ang Bahay” and acknowledged the important initiatives and continuing active work that the Philippine Embassy is undertaking for the benefit of the Filipino and wider communities and for closer engagement between New Zealand and the Philippines. Citing his previous interaction and involvement with Multicultural Councils when he was the Deputy Mayor and Councillor of Wellington city, Chancellor McKinnon highlighted the vital roles and responsibilities of the NZFMC and the Regional Councils in contributing to the people centered and people powered development of the cities and areas across New Zealand and ensuring that inclusive growth, equal opportunities, respect for people’s rights, traditions and cultures and participation in and integration with community life are embraced by all.

In conveying greetings in the Filipino and Maori languages, Ambassador Benavidez warmly welcomed each and every guest to “Ang Bahay” where the Filipino ambience, atmosphere and furnishings will let them experience the warmth, friendship and the renowned hospitality of the Filipino people. She pointed out the importance of Multicultural Regional Councils throughout the North and South islands of Aotearoa in bringing to life the true meaning and essence of the Federation’s objective of bringing together ethnic and migrant communities and exemplifying the evolution of uniculturalism, biculturalism and finally present day multiculturalism. As in the previous years, the annual meetings held in Wellington and other areas will undoubtedly allow the Federation of Multicultural Councils to grow from strength to strength in educating, advocating, promoting, supporting and sharing of information among regional multicultural councils and ethnic communities on a broad spectrum of issues, concerns, needs, programmes and projects that impact on the way of life in New Zealand’s multicultural society. She took the opportunity to thank the multicultural communities for the outpouring of sympathy, assistance and generosity in the aftermath of typhoon Haiyan which devastated Central Philippines seven months ago. Ambassador Benavidez also shared with them the multicultural tapestry of the Philippines and the Southeast Asian region arising from waves of migration across centuries, coming of different religions, arrival of populations from various countries, legacy of colonial influences and influx of modern day migration and movement of people across boundaries. A representative sampling of the creativity, artistry and variety of Filipino culture, traditions and way of life can be seen from the 40, 352 Filipinos who compose 1% of New Zealand’s population and continue to be acknowledged and appreciated for their positive work ethics, vital contributions to national development both in the Philippines and New Zealand and ability to connect and integrate with local communities. They continue to animate churches, enliven festivals, be active participant in multicultural and women development and empowerment activities and key contributors to the people-based close relationship between the Philippines and New Zealand. “I hope that as you experience Filipino hospitality tonight, you will take up our invitation to come and visit our country and experience what it means when Filipinos, New Zealanders and visitors from other countries say that it is indeed more fun in the Philippines,” Ambassador Benavidez stated.

The lively fellowship and active interaction among the special guests from Wellington, heads and representatives of the multicultural councils and the Philippine Embassy Team continued during the dinner featuring a variety of Filipino cuisine prepared by the “Ang Bahay” staff for this significant occasion. They thanked Ambassador Benavidez for “the beautiful arrangements”, “delicious food served” and the friendliness and attentiveness of the Embassy staff and the distinctive and delightful Filipino welcoming and cultural experience. The gathering with the National Federation of Multicultural Councils in New Zealand provided an enriching and excellent opportunity to connect and engage with the Filipinos, different migrants and ethnic groups supporting national and regional programmes and projects to develop unity, inclusiveness, openness and tolerance among New Zealand’s diverse communities, celebrate, learn, respect and encourage each other’s uniqueness, religious beliefs, traditions, cultures, festivals and languages