Philippine Ambassador to New Zealand Virginia H. Benavidez presented her credentials to H.E. Lieutenant General The Rt. Hon. Sir Jerry Mateparae, Governor-General and Commander-In-Chief In and Over The Realm of New Zealand at the Government House Wellington on15 September 2011. She was among the five Heads of Mission who were received by the Governor-General in his first official diplomatic function since he assumed Office on 31 August 2011. She was accompanied by her husband, Mr. Pio J. Benavidez, Minister and Consul Giovanni Palec, First Secretary and Consul-General Marcos Punsalang and Honorary Consul-General in Auckland, Ms. Emilie Shi.

Following the Maori welcome ceremony, consisting of a traditional challenge and exchangeHongi New Zealand of greetings with a “Hongi” (light pressing of noses and head bow signifying the sharing of the breath of life and respect for each other) with the indigenous cultural group and the Inspection of the Military Guard of Honor and the General Salute, Ambassador Benavidez presented her Letters of Credence and Recall of her predecessor to the Governor-General witnessed by the Governor-General’s wife, Lady Janine, the representatives of the Government of New Zealand, senior officials from the Ministry of Foreign Affairs and Trade (MFAT) and Members of the Household. She started her brief remarks with greetings in the Maori language to the Governor-General who is the second Maori to be appointed by the Queen of England to this post. She reiterated the felicitations and greetings of President Benigno S. Aquino III to Sir Jerry Mateparae who has just assumed the post of Governor General and Commander-in-Chief in and over the Realm of New Zealand and conveyed the best wishes of the Government and People of the Republic of the Philippines to the Government and People of New Zealand. She pointed out that Philippines-New Zealand relations since its establishment 45 years ago, bilaterally and multilaterally, can be best described as strong, steadfast, stable and strategic. The Philippine Government attaches great importance to people-to-people ties and interaction at all levels to enhance the Philippines’ long-standing relationship and translate into practical ways the shared commitment of the Philippines and new Zealand to work together and develop alongside each other. Inspection of the GuardsThroughout the years, there have been high level meetings and dialogues, active exchange of visits and broadening cooperation between government officials, business communities and other groups from both countries as well as in the context of ASEAN, APEC, ASEM, the United Nations and other regional and international bodies. The important contributions of the Filipinos and New Zealanders to the national development programs of both countries deepen the reservoir of goodwill with and support for each other. The Philippines will continue to build on this strong foundation of friendship and partnership with New Zealand in the political, economic, defense, education, socio-cultural and various areas and to work hand-in-hand to fulfill both countries’ collective vision for greater peace, progress and prosperity in the region and the world. She ended with Maori expressions of appreciation and goodwill. 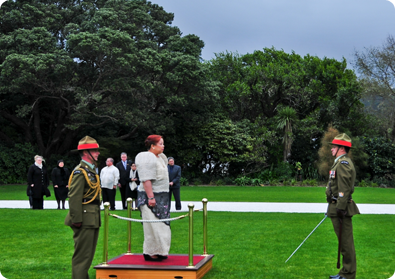 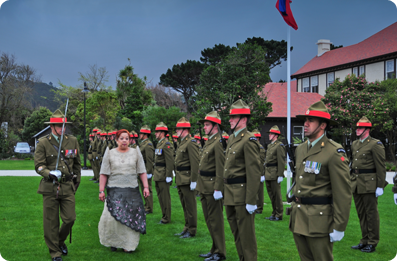 In his reply, the Governor-General conveyed his best wishes and thanks to President Aquino for his kind greetings and stated that New Zealand values its long standing relationship with the Philippines, as a welcome dialogue partner in the Pacific Islands Forum and the Asia-Pacific region. For New Zealand, the Philippine traditions of openness, democracy and tolerance are highly respected and the strengthening of links through the ASEAN Regional Forum, APEC, ASEM, the East Asia Summit, the ASEAN-Australia-New Zealand Free Trade Agreement and the expanded ASEAN Defence Ministers Dialogue are mutually beneficial. He cited cooperation in the geothermal industry, forestry, coastal management, new dairy program, law enforcement, the ASEAN Scholarships programme, trade and a Minister-led business mission visit to the Philippines next year as bright prospects to build future partnerships.

He likewise acknowledged the important contributions of Filipinos in New Zealand in the areas of education, information technology, services and tourism and the vital people-to-people ties as the key to the future of the bilateral relationship between New Zealand and the Philippines.

Presentation and Handshake PHL and NZL

After the formal ceremony, Sir Jerry Mateparae and Lady Janine hosted a luncheon in honor of the five Heads of Mission who presented their credentials. Ambassador Benavidez was seated at the right of the Governor-General and took the opportunity to thank him for the warm reception and generous hospitality and to share with him the latest positive developments in the Philippines under the Aquino administration, priorities in enhancing economic collaboration with New Zealand, the continuing partnership and contributions of Filipinos in various fields in New Zealand and support of the Filipino community for New Zealand’s current hosting of the Rugby World Cup and other multicultural festivities and events. She also reiterated the Philippines’ heartfelt wishes for New Zealand’s resounding success and victory of its All Blacks Rugby team in the on-going World Cup matches.