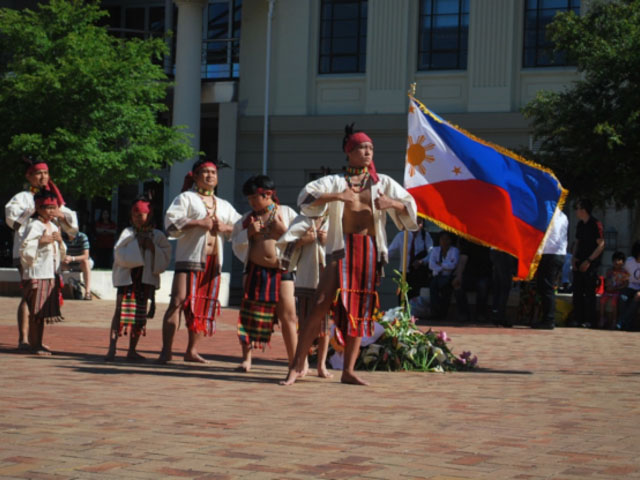 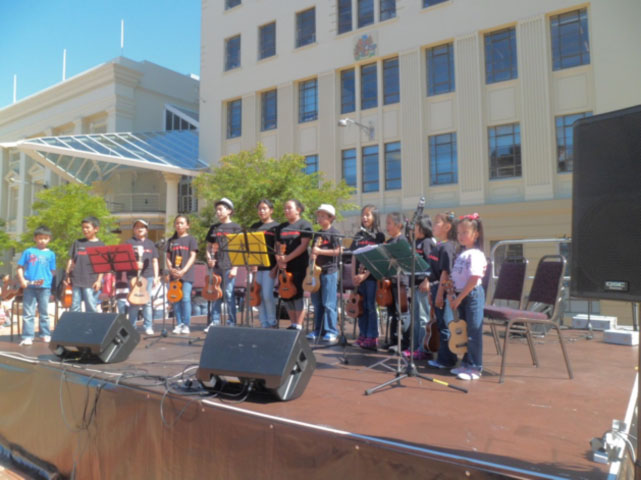 In the aftermath of the total devastation, tragic loss of lives and terrible anguish and suffering caused by super typhoon Haiyan in Central Philippines on 8 November 2013, Filipino organizations, individuals and community groups in the Wellington area, spearheaded by the Federation of Filipino Associations, Societies and Clubs in New Zealand Inc. (FFASCNZ Inc.) in conjunction with the Philippine Embassy, held a Special Concert at the Wellington’s Civic Square on 23 November 2013. 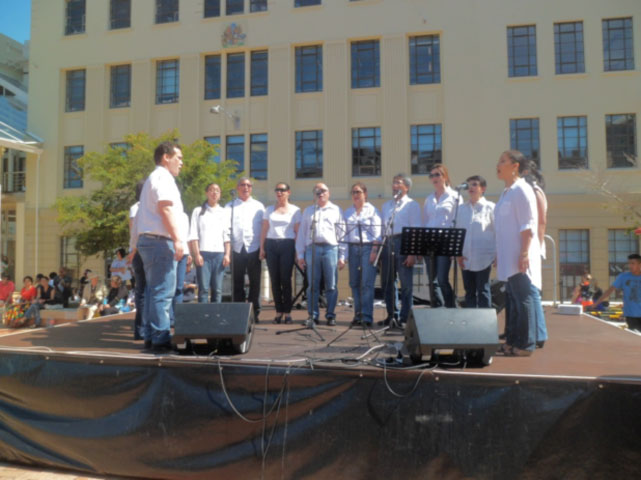 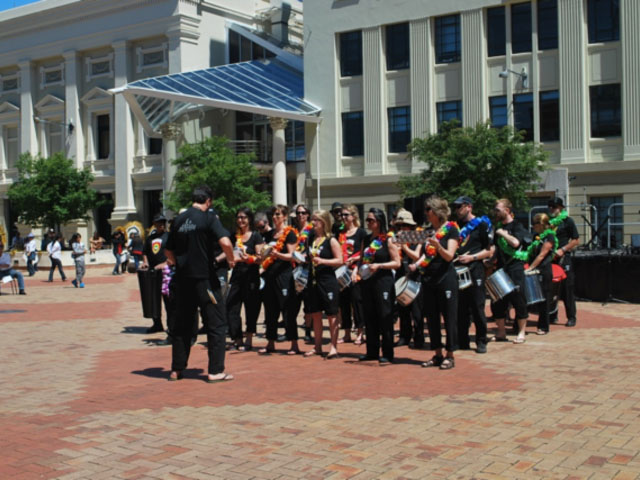 Members of the Filipino community and the international community participated in a program which featured singers, bands, cultural dancers, and volunteer entertainers. An Argentinian musical artist accompanied Argentinians dancers performing the tango and the Brazilian percussion ensemble, Batucada, performed its famous rhythmic music as well as accompanied the dancers of the Filipino Ati-atihan. Several Filipino bands, singers, cultural dancers and musicians volunteered their talents and performed at the Special Concert.

Mayor Celia Wade Brown and the Wellington City Council so kindly gave the necessary clearances to enable the Filipino community to hold the Special Concert at the Wellington Civic Square and provided their wholehearted support for this endeavor.

Ambassador Virginia H. Benavidez and the entire Philippine Embassy personnel, their families and private staff were all present to support the Special Concert. In her sppech, Ambassador Virginia H. Benavidez delivered a speech reiterated the gratitude of the Philippine government and the Filipino people for the generous contributions of the New Zealand government for relief operations in the disaster stricken areas, the deployment of a C-130 plane for logistical support, expressions of sympathy and solidarity from Prime Minister John Key, members of Parliament and national and local leaders, assistance in providing disaster management expertise, the New Zealand public throughout the North and South Islands who are undertaking incredible fund raising drives in local councils, private companies, schools, media, civic clubs, multicultural groups, individuals, families, churches, associations and organizations, celebrities, Red Cross, UNICEF, Caritas, Save the Children New Zealand, among others, and in every sector of New Zealand society. “Thank you New Zealand for the mounting groundswell of sympathy, support and solidarity. You are truly a close friend and valued partner who knows and feels how it is to go through a massive disaster and undertake the hugely enormous tasks of reconstruction, rehabilitation and rebuilding. Engraved in our hearts are your prayers and messages to the Filipino people of Kia Kaha (Be strong) Arohanui, (With great love) and Taiki e (We are one),” Ambassador Benavidez said. She gave tribute to the Filipino community in New Zealand who like their fellow “Kababayans” throughout the world keep the true spirit of “Bayanihan” alive in words and in deeds, especially in times of great need. “Home is where your heart is and even if majority of you have made New Zealand your second home, you still hold a special place in your hearts for your Motherland. You continue to endear yourselves with the people of New Zealand and this has contributed immensely to the outpouring of empathy, generosity and kindness springing forth among New Zealanders. Sa puso at sa gawa, tuloy tuloy po nating ipakita, ipamalas and iparamdam ang ating pagkakaisa sa PAGTULONG, PAGBANGON, PAGMAMAHAL, PAG-ASA at higit sa lahat, PANALANGIN,” Ambassador Benavidez stated.

Wellington Mayor Celia Wade-Brown also delivered remarks and personally conveyed her support for the Filipino Community’s efforts in helping the victims of Typhoon Haiyan. She reminded everyone that such calamities can occur at any time and that emergency preparedness is something Wellingtonians continuously strive for. She encouraged New Zealanders “to open your hearts and your wallets” in this time of great need of Filipinos affected by the typhoon.

A moving memorial started with the presentation of the Philippine flag by members of the Filipino community who have personal ties in the Visayas, the place most affected by typhoon Haiyan, followed by the offering of flowers by members of the Filipino community and friends from New Zealand and other countries. Ambassador Benavidez and Mayor Wade-Brown witnessed the flag presentation and offered flowers as well.

Tarpaulin sheets for “Messages from the Heart for Victims of Typhoon Yolanda” were provided by the Philippine Embassy especially for the occasion and spread out on the Civic Square for people to sign on and give their messages of encouragement, hope and love to the victims of Typhoon Haiyan/Yolanda. Mayor Wade Brown once again reiterated New Zealand’s message to the Philippines and wrote “With our love and support for your recovery and resilience “Arohanui” (Maori word for great love) on the Message sheet. The messages on the tarpaulin sheets will be sent to the survivors of typhoon Haiyan.

The special concert and heart-warming sharing of musical and dance talents by Filipinos, Argentinians, Kiwis and other nationalities at the Civic Square garnered a total of NZ$3,562.60, according to the official count of Westpac NZ. New Zealanders, foreigners and the public generously gave from their pockets and shared graciously from their hearts. All funds raised were donated equally among the Red Cross, UNICEF and Caritas.