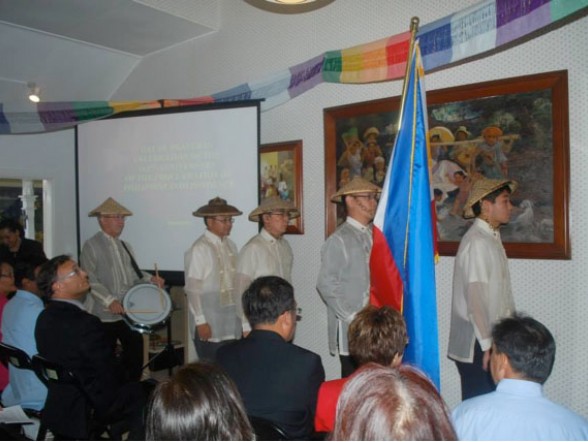 As a fitting start to the series of celebrations for the 115th Anniversary of the Proclamation of Philippine Independence in New Zealand, Ambassador Virginia H. Benavidez and the officers and staff of the Philippine Embassy organized an inter-faith Prayer for the Nation at the “Ang Bahay” (Philippine Embassy Residence) on 1 June 2013. Called the “Day of Prayer in Celebration of the 115th Anniversary of the Proclamation of the Philippine Independence Day, nearly one-hundred leaders and representatives from Filipino organizations and friends from various faiths in New Zealand attended this gathering held for the second year to pray for the Philippines, New Zealand and their respective peoples and leaders and various important prayer concerns.

The Wellington Filipino Community Choir (WFCC) led in the singing of the Philippine national anthem and rendered the opening songs entitled “Child’s Prayer” and “Esto Les Digo” (This I Say). Ambassador Benavidez offered the opening prayer and Rev. Elmer I. Ibarra, SVD, Parish Priest of St. Patrick’s Parish, Wainuiomata and District Superior of the Society of the Divine Word, NZ District delivered the inspirational address. Fr. Elmer highlighted the key points of the presentation made by Dr. Gemma Tulud-Cruz, a senior lecturer in the Australian Catholic University in Melbourne on “Pilgrims of Hope, Migrant Spirituality and Mission Today” focusing on Courageous Hope, Creative Resistance, Steadfast Faith and Migrant Spirituality and these relate to the experiences and lives of the Filipinos who have made New Zealand their second home. He exhorted the Filipinos to remember their roots, be proud of their heritage and demonstrate the time honoured Filipino values of compassion, hospitality and helping hand especially to those in need such as the newly arrived Filipinos in New Zealand and victims of calamities in the Philippines.

Starting with a Child’s prayer, the Filipino community members, religious leaders from New Zealand and friends led prayers for the 115th Anniversary of the Proclamation of Philippine Independence and the activities lined up for the celebration, instilling Greater Sense of Nationalism and Love of Country, Blessings upon the President, Leaders and Officials of the Philippines and Thanksgiving for the Positive Developments and Economic Gains of the Philippines, the 47th Anniversary of the Philippine– NZ Diplomatic Relations, Philippine Embassy Personnel in New Zealand, Projects and Activities, Filipino Community, Migrants and Workers, for their Services and Contributions to National Development and Progress in New Zealand and the Philippines, Protection of the Philippines Against Terrorism, Maritime Disputes, Epidemics and other Diseases, Financial Crisis and Natural Disasters and Calamities, Attainment of Economic Development and Progress, Unity of Muslims and Christians in the Philippines and All Over the World, Strengthening of Filipino Family/Social Cohesion, Protection and Blessings to All of GOD’s Creation, Enhancement of Moral Recovery and Integrity, Promoting Peace and Unity in the Philippines, Promotion of Interests and Welfare of Overseas Filipino Migrant Workers and the Filipino Community in New Zealand, Peace, Progress and Prosperity of New Zealand, the Governor General, Prime Minister and government officials and Spread of the Gospel/ Word of GOD.

Pastor Jake Ormsby, Senior Pastor of The Seventh Day Adventist Church led the closing prayer. An enjoyable fellowship dinner followed amidst the Filipino ambience of the “Ang Bahay” where all the guests felt very much at home as they kicked off the celebrations of the Philippines’ national birthday in June 2013. Filipinos and foreign friends alike thoroughly enjoyed Filipino home-made cuisine such as “molo” soup, “chicken adobo”, vegetables and meat noodles, taufu and vegetables, pan de sal, tuna filling, “puto” “taho” and hot Philippine made chocolate drink.