Knowing fully well the importance of media in public diplomacy, Philippine Ambassador to New Zealand gave an exclusive interview to the Filipino Migrant News, one of the largest Filipino community newspapers in New Zealand based in Auckland.

Shortly after Ambassador Benavidez’ arrival in New Zealand, Mr. Mel Fernandez, Editorial Adviser of the Filipino Migrant News (FMN) spoke with her on the priorities and programs that the Philippine Embassy will undertake in the subsequent months.

The full transcript of the interview is as follows: 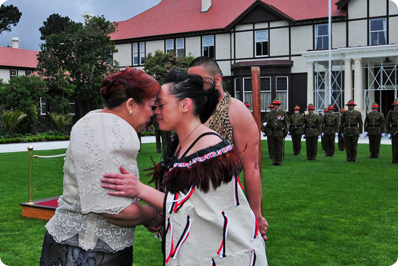 ‘He Tangata’ may well be the guiding maxim of the new Philippine Ambassador to New Zealand Her Excellency, Virginia Honrado Benavidez.

In her first interview with Filipino media in New Zealand, she advocates: “We are all public servants, we have to serve our country.”

During her last posting, a seven year stint as Ambassador at the Philippines Embassy in Brunei Darussalum, she assured Filipinos living and working in the sultanate that “their government works round the clock to extend to them utmost care and attention.

"We are here for you 24/7, unlimited,” she added, during the 109th Philippines Indepen-dence Day celebration organised by the Filipino Association of Brunei.

Her dedication to the job is obvious at the Philippine Embassy in New Zealand located in Wellington.

Barely two weeks in the country and she is keen to launch a ‘hotline’ whereby Embassy staff can be reached quickly during emergencies.

The Ambassador also spoke in detail about the e-Passports issue. “We realise the inconvenience to people wanting to apply for the e-Passport and we are looking at improving the service.

“We have to activate our two mobile e-Passport machines for the ‘Embassy On Wheels’ consular service.

“Auckland is high on the radar screen, but we must not forget those who work in farms and living in outlying area,” she said.

In Brunei, Her Excellency added Bahasa to her linguistic repertoire. Over here, she has just joined a te reo Maori class.

A career diplomat, the envoy for Philippines presented her credentials to the new Governor-General Lt Gen The Rt Hon Sir Jerry Mateparae at his first credentials ceremony at Government House in Wellington on the 15th of September.

Her first chance to meet Filipinos outside the Wellington area will be at Pistang Pilipino 2011 during the Labour weekend celebrations in Hamilton. “I’m looking forward to the occasion,” she told FMN.

Over the years, Ambassador Benavidez has conducted specialized courses in diplomacy including cultural awareness, and women in development.

“I am delighted to see Filipinas in this country holding key roles in consulting, education, government services and health.

“We need to always recognise the value of women in career roles and as wives and homemakers, particularly in New Zealand and in countries where equality and the rights and privileges of equal opportunities elevates the status of women, “ she adds. Ambassador Benavidez sees trade and investment and tourism development as a priority for the Philippines.

“One of my first tasks is to look at connectivity as a priority. We need to revitalise our links to New Zealand with direct flights to and from the Philippines. “Kiwis already know about the attractions of the Philippines, its natural wonders, spas, wellness products and the variety of food and cultural offerings.“We will be relying on Filipinos here to participate in the ‘Pinoy Home-coming Campaign’ and bring home a friend as part of the President’s 2016 tourism promotion drive. “Tourist arrivals from New Zealand has more than doubled recently. In 2009 there were 4,000 visitors and in 2010 it swung upwards to 10,000 visitors,” she elaborates.

According to statistics provided by the Office of Tourism Development and Planning in Manila, currently New Zealand is not among the top 12 markets by volume for tourist arrivals to the country. But the latest figures show potential for further growth: From January to July 2011, there were 7,238 visitors from New Zealand, compared to the January to July 2010 figure of 6,129. (Editor – visitor arrivals to the Philippines from Australia peaked to 96,000 in 2010).

“Trade, investment and tourism are my key areas of interest. I will be visiting Auckland to meet with media and travel agents to promote our country.”

The FMN is published monthly by husband and wife team Mel Fernandez (Editorial Adviser) and Shiela Mariano (Editor). This Filipino community newspaper has a circulation of 10,000 and may also be accessed on line at www.filipinonews.co.nz. Circulation is mainly free and is made through Filipino retail outlets, resource centers, libraries and community groups. FMN also organizes and sponsors various cultural and community programs, such as the annual Fiesta Pilipinas food, cultural and travel expo in various cities in NewZealand.

“The Philippine Embassy in New Zealand is blessed to have them as our vital partners in projecting a favorable image of the Philippines and the world-class talent and creativity of the Filipino people, and in serving as an effective channel for the Embassy’s dissemination of news, announcements and features pertaining to Philippine-New Zealand relations and the Filipino community throughout the country,” Ambassador Benavidez said.