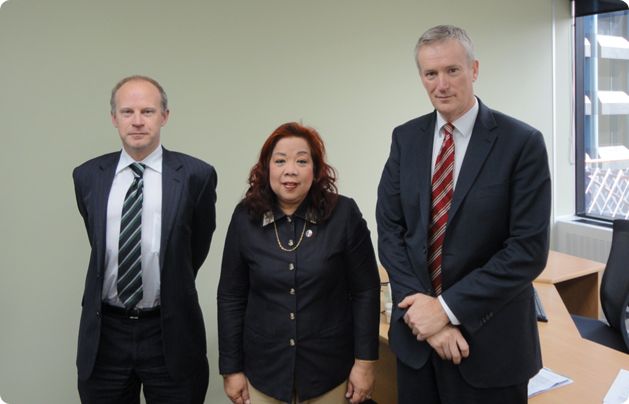 The WECC is the voice of business in Wellington City. The Chamber has 1600 member companies/businessmen – by far the biggest business network in Wellington, the third largest city in New Zealand after Auckland and Christchurch. Furthermore many businesses choose to establish a presence in Wellington due to the fact that the city is the capital of New Zealand. Hence the Chamber serves as a very important bridge between the New Zealand Government and the private sector.

Ambassador Benavidez, together with Minister Marcos A.S. Punsalang, gave a briefing to Messrs. Harris and Harding on the progress being made by the Philippine economy and opportunities in the Philippines in the areas of bilateral trade and investment. These would cover Philippine home design products, seafood processing and re-export, information technology/business processing outsourcing (IT/BPO), E-governance, geothermal energy and enhancing air connectivity. The Ambassador highlighted to the officers of the Chamber that the Philippines is open for business and that President Benigno C. Aquino III is strengthening the foundations for a favorable environment to do business in the Philippines through his anti–corruption and transparency measures as well as his campaign to promote accountability through the 5Rs – right project, right people, right cost, right quality and right on time.

Mr. Harris was heartened to know the joint partnership between Prime Foods New Zealand, New Zealand’s second largest salmon processing company, and Alliance Select Foods International, a leading canned tuna producer in the Philippines. Both companies set up a joint venture company, the Big Glory Bay Salmon and Seafood, in General Santos City. The company built and equipped a modern processing facility which processes salmon from New Zealand for re-export to international markets. Business has been so good that the company has plans for further plant expansion. Mr. Harris stated that the Philippines should not limit itself to importing finished New Zealand products and proposed an arrangement similar to the aforementioned example wherein Philippine manufacturers could add value to New Zealand products and re-export them. Among such products would be seafood, wine and timber/wood products.