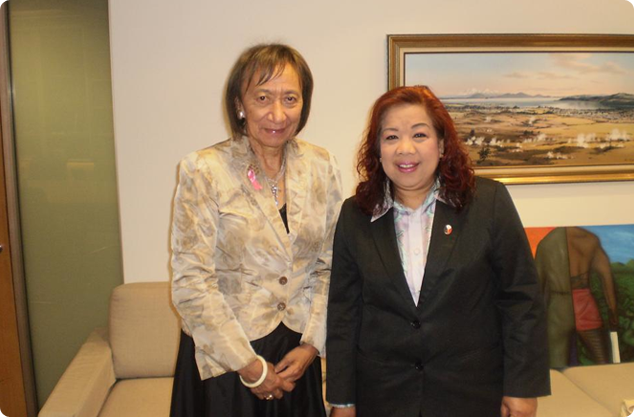 In addition to her position as Minister for Disarmaments and Arms Control, Minister te Heuheu currently holds an extensive portfolio as Minister of Courts, Minister for Pacific Islands Affairs and Associate Minister for Maori Affairs. She has the distinction of being the first Maori woman to gain a law degree from the University of Victoria and to be admitted to the High Court as a Barrister and Solicitor. She went on to practice law in Wellington and Rotorua before entering Parliament.

Her distinguished and pioneering career in politics saw her become the first Maori woman to gain election as a Member of Parliament (MP) for the National Party; the first Maori woman to chair the Maori Affairs Select Committee and only the second woman to be appointed to a New Zealand Cabinet. Her ministerial portfolios from 1998 to 1999 were Minister of Women’s Affairs, Associate Minister for Treaty of Waitangi Negotiations and Associate Minister of Health. Minister te Heuheu continues to serve as Governor of the Arts Foundation of New Zealand, which she has done since its establishment in 1998. For her outstanding services to the public, Minister Georgina te Heuheu was awarded the Queen’s Service Order (QSO) in 1993.

During their meeting, Ambassador Benavidez congratulated Minister te Heuheu for the victory of New Zealand’s All Blacks Rugby Team, 2011 Rugby World Cup Champions last Sunday in Eden Park, Auckland. Having just arrived in New Zealand six weeks ago at the beginning of the Rugby World Cup, the Ambassador was amazed at the overwhelming support given by the whole country to the team, having seen first hand the national passion for rugby and the electric atmosphere of hope and enthusiasm of the fans throughout the country. Being assigned in New Zealand, indisputably known as the “Home of Rugby”, Ambassador Benavidez also got caught up in the spirit of the games, rooted for the All Blacks Team and exhorted the Filipino community wherever they were to be one with the people of New Zealand in supporting and cheering for the All Blacks national team. Minister te Heuheu thanked Ambassador Benavidez and replied that the victory by the All Blacks was historic. She noted the Ambassador’s interest in the traditional Maori Haka challenge and Ambassador Benavidez said her first exposure to the Haka during her presentation of credentials to the Governor-General, Lt. Gen. Rt. Hon. Sir Jerry Mateparae last 15 September that generated in Ambassador Benavidez a growing interest in Maori culture. As a result, she is now taking Maori language lessons. This delighted the Minister who discussed with the Ambassador the history of Maori in New Zealand and encouraged her to continue learning the Maori language since it is through the language that she will gain an insight into the richness and distinctive features of the Maori culture.

Minister te Heuheu informed Ambassador that she has been to the Philippines and feels very close to the 35,000 strong Filipino community in New Zealand with whom Maoris share similar values. In thanking Minister te Heuheu for her heartwarming message, Ambassador Benavidez also agreed with the Minister that Filipinos continue to make important contributions to nation-building in New Zealand and the lives of its people. Even the grounding of the MV Rena, which has elicited very few incidents of antagonism towards Filipinos, has brought out the best in Filipinos as they volunteered in the spirit of “bayanihan” (working together) to help clean up the beaches of Tauranga.

Ambassador Benavidez wished Minister te Heuheu her very best as she is retiring this year and lauded her sterling career and exemplary achievements in public service, a valuable legacy that will always remain in the hearts and minds of the nation and her people.