Philippine Ambassador meets with the Queenstown Chamber of Commerce 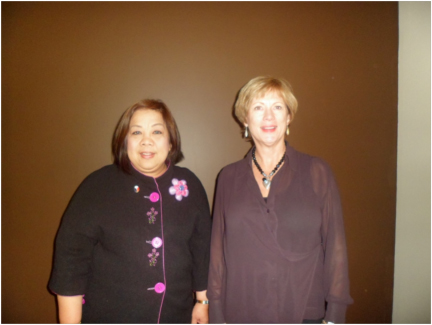 As the Philippine Embassy simultaneously delivers its mobile consular services for the Filipino communities and embarks on economic diplomacy initiatives in Queenstown and the surrounding cities of the South Island in New Zealand on 12-15 April 2013, Ambassador Virginia H. Benavidez and Consul Arlene Gonzales-Macaisa made a business call on the Queenstown Chamber of Commerce represented by its Chief Executive Officer Ann Lockhart on 15 April 2013.

Ambassador Benavidez informed Ms. Lockhart that Queenstown has a permanent Filipino population numbering two hundred (200) and that they are active in the multicultural fabric of Queenstown’s social and economic society. She assured Ms. Lockhart that the Filipino community will respond positively and actively to the “Shaping Our Future” program of Queenstown which utilizes public forums and online discussions to gather collective community expertise in order to create a progressive future for the district. Discussions focused on the importance and complementarities in the Philippines-New Zealand cooperation on ICT. IT is also one area in which Queenstown is looking at as a niche opportunity to develop in order to diversify its economic base along with the e-Commerce and education sectors. Subsequent discussions were on the unprecedented rise of the Philippine economy. Ambassador Benavidez shared with Ms. Lockhart the reform agenda and good governance priorities of President Benigno S. Aquino III. The present administration’s sincere commitment to good governance has attracted foreign investments and paved the way for the channeling of funds for greater health care coverage and educational opportunities especially for the poorest of the poor families in the Philippines.

Ambassador Benavidez thanked Ms. Lockhart for a fruitful meeting, and said she is looking forward to visiting Queenstown again for possible business, trade and investment opportunities.