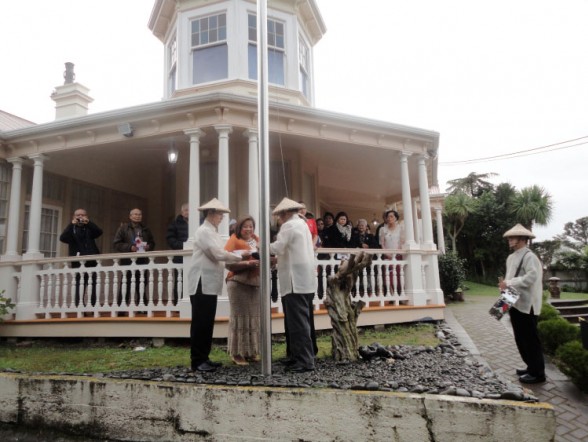 During the hoisting of the Philippine flag at “Ang Bahay” Grounds, Ambassador Benavidez was assisted by the KASAGIP Charitable Trust Honour Guards, while Ms. Arla Fontamillas, a Filipino scholar at Victoria University in Wellington led the singing of the Philippine National Anthem. Pastor Ariel Castro of the Baptist Bible Church Wellington led the Opening Prayer for the occasion.

Ambassador Benavidez gave her Independence Day Address on this significant day, with this year’s theme, “Kalayaan 2013: Ambagan tungo sa Malawakang Kaunlaran,” or “Independence Day 2013: Pitching In towards Inclusive Growth,” reiterating the prevailing spirit of unity and togetherness to help accelerate the Philippines’ sustained march towards shared prosperity and demonstrate the Filipinos' excellence and resiliency to confront global challenges. She shared the unprecedented economic success and growth of the Philippines despite the global economic slowdown, and the affirmation of global and domestic confidence in the Philippines highlighting the dividends of good governance and reform agenda of President Benigno S. Aquino III. His administration’s dictum of “good governance is good economics” is anchored on the promotion of a culture of integrity, honesty, accountability and transparency and the continuing fight against corruption and poverty instituted across all levels of government. She called on Filipinos in New Zealand to continue helping make a distinctive and positive difference in people’s lives through their support to their families back home, livelihood, education, environment, good governance, Filipino products and investments.

Mr. Ephraim Gazo, Eastern Ward Community Committee Member of the Hutt City Council, gave the Testimony of a Filipino in New Zealand. He spoke about his move to New Zealand at a very young age, his education, how he was able to integrate into the community very well, and his current work at the Hutt City Council. Mr. Gazo said he feels honored to have been given the opportunity to be in the public service not only for the good of New Zealand, but also, as a Filipino, for the welfare of his kababayans and the Philippines, even from a distance.

After all the inspiring messages, Ambassador Benavidez led the ceremonial Cutting of the Independence Day Cake. She was joined by the Filipino community leaders present in the gathering and the Embassy personnel.

Exquisitely led by Ms. Arla Fontamillas, the closing song, “Pilipinas Kong Mahal,” was then sung ardently by everyone. The song truly captured the passion of the patriotic gathering.

The videos of “It’s More Fun in the Philippines” and “Ang Galing ng Pinoy” were shown to the very enthusiastic audience to formally end the ceremony. A fiesta-like atmosphere was experienced as the “Ang Bahay” showcased Filipino cuisine for the guests in the lunch and fellowship that followed.