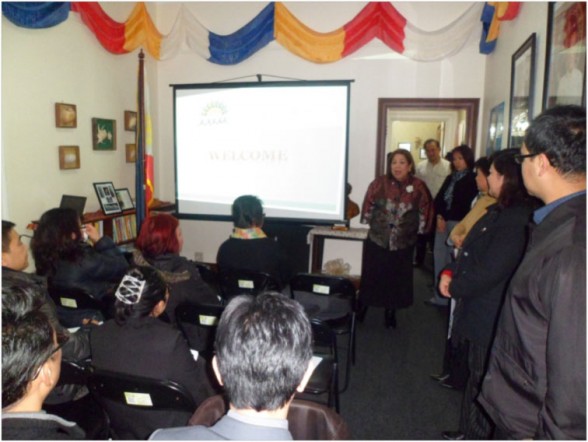 In her welcoming remarks, Ambassador Virginia H. Benavidez encouraged the Filipino community to steadily pursue their GOD-given dream of having a centre that will serve as a haven and headquarters for Filipino community activities and programs. She stated that the meeting for the FCC was appropriately held at the Sentro Rizal area and “if our national hero were in our midst this evening, he would be very happy to know and see that various Filipino community leaders and members are together as the FCC would be a unifying and serve as a proud testimony of the sacrifices, support and spirit, individually and collectively, of Filipinos who are in New Zealand to promote and project maintain the uniqueness and richness of Filipino culture, identity and creativity. We at the Philippine Embassy are behind you in helping make your dream come true.” She also stressed the importance of integrity, accountability and transparency in every stage of the planning, fund raising and conduct of activities for the FCC.

Consul Arlene Gonzales-Macaisa who served at the Philippine Consulate-General in Hawaii shared the experiences and extensive efforts of Filipinos from all walks of life and their families to build the largest ever Filipino Community Centre.

The Bulwagan Foundation Charitable Trust headed by Ms. Flora Nogoy took on the responsibility of explaining the tasks, opportunities and challenges of planning, building and maintaining a Filipino Community Center. The project aims to develop and operate a community center that provides a comprehensive infrastructure for the promotion and perpetuation of the Filipino culture and spirit in New Zealand based on fundamental values of the motherland – the Philippines. Complete with an architectural diagram of what the future FCC would look like, Ms. Nogoy also detailed the budgetary requirements and the possible ways and means of raising funds for said requirements. An idea that took hold among those present was the “alkansiya” or native Filipino piggy-bank made of polished coconut shells which are being numbered for record purposes. The first 100 alkansiya will be distributed to interested members of the community in due time to be opened during a scheduled event for an FCC fundraising event. Ms. Nogoy also gave updates on meetings with New Zealand’s local officials and city councils in Greater Wellington for possible venues for the FCC.

The Filipino community leaders provided several ideas, suggestions and inputs for the eventual fruition of the FCC. Each one agreed that there is a long and challenging road ahead but that the key to making the dream a reality is to unify the Filipino community in this laudable project following the best practices of professionalism among like-minded individuals and groups demonstrating sacrifice, unity, hard work and solidarity.

Ms. Nogoy and the trustees of Bulwagan Charitable Trust and the Filipino community thanked Ambassador Benavidez and the Philippine Embassy for the much awaited opportunity to gather and revitalize the goal of having an FCC in Wellington. They enjoyed the fellowship dinner hosted by Ambassador Benavidez savouring Filipino culinary delights such as molo soup, stewed salmon in vinegar and onions, “Ang Bahay” caesar’s salad, pork springrolls, chicken afritada, home-made leche flan and sans rival desserts.